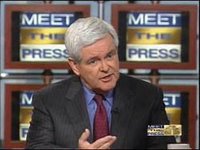 Newt Gingrich has been going on television shows this month saying that World War III has begun. He first made the comments to the Seattle Times, and then Tim Russert on NBC's Meet the Press. He correctly identifies that the misnomer "war on terror" doesn't quite explain the nature of the threat the West faces from radical Islam, which is allied with terrorists and tyrants around the world. Are we in WWIII already? I don't know. But it is a better description of the worldwide battle taking place between civilization and barbarism. Read more here, here and here.
Posted by Brendan Steinhauser at 12:43 PM No comments:

The latest NRA update urges members to contact their federal legislators and tell them to co-sponsor and vote for the following bill, that would end the ineffective and unconstitutional D.C. gun ban. In a city with a homicide rate through the roof, it is clear that the gun ban only disarms innocent citizens who are now defenseless against the criminals in the streets of D.C. H.R. 1288/S. 1082-Legislation to repeal the draconian D.C. gun ban and restore the right of lawful District residents to own firearms to defend themselves and their families. There is another good bill pending in Congress. Please tell your legislators to support it as well. H.R. 4547/S. 3275-Legislation that would allow any person with a valid carry permit or license issued by a state to carry a concealed firearm in any other state if he or she meets certain criteria. Importantly, the laws of each state governing where concealed firearms may be carried would still apply within its borders.
Posted by Brendan Steinhauser at 11:59 AM No comments:

Today a press conference was held by International ANSWER. They are planning a massive anti-Israel, anti-US and anti-capitalism rally in DC on Aug. 12th. Ramsey Clark, the former attorney general for LBJ, is the spokesperson for ANSWER. He has defended such tyrants as Slobodan Milosovic and Saddam Hussein in their trials for war crimes. Clark is the founder of the International Action Center, which is an umbrella organization for ANSWER. The IAC urges members to "stand with the Palestinian and Lebanese resistance." If this isn't siding with the enemy, I don't know what is. ANSWER is essentially a front group for the Workers World Party. Brian Becker is the key link in the chain. Becker is a director of ANSWER and often speaks at "anti-war" rallies. He is also a member of the Secretariat of the WWP. LA Weekly published a great expose on the "anti-war" movement in 2002, which details the transparent nexus between Becker, ANSWER and the WWP. The article notes that, "The WWP advocates socialist revolution and abolishing private property... and it hails North Korean dictator Kim Jung Il for preserving his country's socialist system and 'from falling under the sway of the international banks and corporations that dictate to most of the world." Read what the WWP has to say about communist states like Cuba and Venezuela in their latest publication. Not exactly the "anti-war" movement the mainstream media tells us about. So before you show up at the Aug. 12 rally and protest against Israel and the Iraq war, think about who you are standing alongside: communist totalitarians who support some of the worst dictators and human rights abusers in history.
Posted by Brendan Steinhauser at 11:23 PM 2 comments:

DiscoverTheNetwork.org makes the claim. I am trying to verify the story. Free Republic has been talking about this for some time. [During the last week of December 2004, Benjamin announced in Amman, Jordan that Global Exchange, Code Pink, and Families for Peace would be donating a combined $600,000 in medical supplies and cash to the terrorist insurgents who were fighting American troops in Fallujah, Iraq. Said Benjamin, "I don't know of any other case in history in which the parents of fallen soldiers collected medicine ... for the families of the 'other side.' It is a reflection of a growing movement in the United States ... opposed to the unjust nature of this war."] Code Pink paints a rosy picture of the Jordan trip. [Amongst our new Iraqi friends are four doctors and activists with humanitarian aid organizations. They have been buying and distributing the medicines and basic supplies to the Fallujah refugees over the past few weeks.]
Posted by Brendan Steinhauser at 5:06 PM No comments:

Posted by Brendan Steinhauser at 5:59 PM No comments:

The Conservative Revolution is Coming to Boston, MA

This fall, look out for the conservative revolution on college campuses. It will be spreading to the city of Boston, MA as my good friend Ryan Sorba, an expert in campus activism, heads out there for the Leadership Institute. The LI is planning a massive onslaught against the campus Left, and all of their field representatives are now armed with a copy of TCR!!! Utilizing the ideas in the book, along with the combined resources of ISI, Students for Saving Social Security, Accuracy in Academia, Students for Life, Students for Prosperity, FreedomWorks, the Network of enlightened Women, and Students for Academic Freedom, the conservative campus field reps will create a firestorm this fall. The Campus Leadership Program at LI is set to have its best year yet. To quote Anthony Mantova of LI when I asked about the size and scope of the program, "Well, Left-wing scum doesn't smash itself." No, Anthony, it does not. But with this alliance of campus conservative groups ready for the fall, Left-wing scum like "Campus Progress" has a lot to worry about.
Posted by Brendan Steinhauser at 5:29 PM 2 comments:

The next ISI Alumni Network event is August 8. We are doing another "Conservatism on Tap" at the Brickskeller in DC. Here are the details.
Posted by Brendan Steinhauser at 3:43 PM No comments:

Opinion Journal has a great piece on Iran and the Middle East today. I agree that Israel cannot cease its actions until Hezbollah is cleared out of Lebanon. Otherwise, they will remain a constant threat to Israeli citizens.
Posted by Brendan Steinhauser at 9:56 AM No comments:

This is quite a scary situation for them. MSNBC reports on their condition. "Joanne Nucho thought she would be spending her summer in a safe Western-style city when she headed off to Beirut, Lebanon, to study Arabic as part of her doctoral program at UCLA. But suddenly she finds herself huddled in a college dormitory with 40 other Americans, trapped in the middle of an undeclared war and fearing for her life."
Posted by Brendan Steinhauser at 6:16 PM 1 comment:

Today I met with a few of the leading conservative groups who are trying to provide resources for college students faced with overwhelmingly leftist universities. It was the inaugural meeting of the Coalition for America's Future, led by Chaz Sirame and Jo Jensen of Students for Saving Social Security. The meeting's purpose was to bring together some of the leaders of organizations that share one common goal: bringing the conservative revolution to college campuses. The coalition included S4, along with the College Republicans, Leadership Insitute, Intercollegiate Studies Institute, Accuracy in Academia, Claire Boothe Luce Institute, FreedomWorks, Independent Women's Forum, Institute for Humane Studies, Students for Life, Students for Prosperity and Young America's Foundation. We also received interest from Students for Academic Freedom, Bureaucrash and Network of Enlightened Women. I am confident that if these unique groups work well together, sharing student contacts, hosting events together, and generally keeping the lines of communication open, the Left will be overpowered by both superior intellectual ideas and better organization. This goal is exactly why I wrote The Conservative Revolution: How to Win the Battle for College Campuses in the first place. I wanted to make students aware of the resources at their disposal, and educate and motivate them to take back their campuses from the grip of the far Left. I think after today's meeting, we are one step closer to seeing this come to fruition. My sincere thanks goes out to the groups that attended the meeting, and also those that will join our cause in the near future.
Posted by Brendan Steinhauser at 1:40 PM No comments:

My friends at Students for Saving Social Security are hiring. They have two positions available: activism deputy director and director of communications. These positions are great opportunities for young students looking to get their feet in the door. Please email me at bsteinhauser @ freedomworks.org if you are interested in the details.
Posted by Brendan Steinhauser at 11:24 PM 3 comments:

Sen. Durbin a Hypocrite on Guantanamo

Today on Wolf Blitzer's show, Sen. Dick Durbin (D-IL) painted a rosy picture of detainee treatment at Guantanamo Bay. Contrast his comments on CNN with his comments on the Senate floor last year:

"If I read this to you and did not tell you that it was an FBI agent describing what Americans had done to prisoners in their control, you would most certainly believe this must have been done by Nazis, Soviets in their gulags, or some mad regime--Pol Pot or others--that had no concern for human beings. Sadly, that is not the case. This was the action of Americans in the treatment of their prisoners."

Posted by Brendan Steinhauser at 7:52 PM No comments:

Here is the site put up by the government. I believe that these documents will show that our understanding of Saddam's involvement in anti-American terrorism was much more extensive than most people think.
Posted by Brendan Steinhauser at 4:12 PM No comments:

I will be on the mall tomorrow night watching the fireworks. I am expecting an awesome show. It's pretty exciting to know that I will be in DC for the Fourth of July. To all my friends and family: I miss you and wish you could be here. Happy Fourth!
Posted by Brendan Steinhauser at 5:08 PM No comments: