Protest at the Washington Hilton 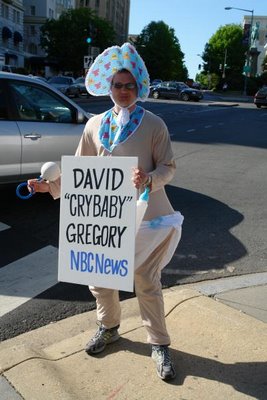 Yes, this is yours truly. I was with a group of Protest Warriors and Freepers, protesting the White House Press Corps at their White House Correspondants Dinner. More pics here. The Chicago Tribune gave us props here.
Posted by Brendan Steinhauser at 1:05 PM 1 comment:

From the Austin American Statesman: The Texas House of Representatives this morning began debate on a proposed tax overhaul similar to one being pitched by Gov. Rick Perry. The House was expected to take a series of votes. They decided to postpone debate until this afternoon on House Bill 3, which would replace the corporate franchise tax with a new "margins" tax. Then they passed House Bill 2, which would lower property taxes by using money from a new business tax, a higher cigarette tax and a change in sales-tax reporting on used cars. After that, they took up House Bill 1, which would dip into the state surplus to cut property taxes. Critics are calling it the "get outta Dodge plan." The tax overhaul is contained in five separate bills that the House is debating today. Lawmakers are under a June 1 deadline from the Texas Supreme Court to change the way Texas pays for schools.
Posted by Brendan Steinhauser at 5:42 PM No comments:

Here is a great piece on school choice in Texas.

My political contributions are an open record, as they should be. But opponents of school choice hide from public view both taxpayer-financed lobby efforts and substantial unreported political spending. These critics should stop hiding. And the media should scrutinize their efforts as they have mine. My resolve is firm and my political activities unambiguous: those who support helping the neediest children escape failing schools will receive my support, and I will vigorously oppose those who don't.

Posted by Brendan Steinhauser at 1:28 PM No comments:

I am sitting outside the state capitol in Jefferson City, overlooking the river. It is a beautiful day here. I am meeting FreedomWorks members in Columbia, Jefferson City and St. Louis this week. Columbia seems like a fun college town and St. Louis truly is the gateway to the west.
Posted by Brendan Steinhauser at 2:30 PM No comments:

Iowa has been fun. I just hope I can get out of here without getting caught in a tornado or coming down with the mumps!!
Posted by Brendan Steinhauser at 3:34 AM No comments:

US to Strike Iran?

Read an account of U.S. plans for nuclear attack against Iran's weapons development sites here. Congressman Ron Paul and others urge restraint on the Iran question. I must say that I support striking the Islamist regime of Iran, but I do not want to see us deploy troops there. In fact, I don't think we can even consider that possibility in light of our current commitments. There is also real concern for retaliatory terrorist attacks by Iran against our interests and population centres. As in Iraq, there are no easy answers. Here are some excerpts from Rep. Paul:

"Already the coordinating propaganda has galvanized the American people against Iran for the supposed threat it poses to us with weapons of mass destruction that are no more present than those Saddam Hussein was alleged to have had."

"What will it take for us to learn from our failures?"

"Common sense tells us the war in Iraq soon will spread to Iran. Fear of imaginary nuclear weapons or an incident involving Iran – whether planned or accidental – will rally the support needed for us to move on Muslim country #3. All the past failures and unintended consequences will be forgotten."

Posted by Brendan Steinhauser at 11:03 AM No comments:

I am here in Indianapolis today meeting with Republican Party officials, state senate staff, non-profits and the Governor's office. It has been quite dreary, but the people, at least, are friendly. Tonite, FreedomWorks is celebrating it's big Telecom Reform win in the state. Looking forward to seeing our friends and colleagues, like the Discovery Institute, who helped make this possible. Tomorrow night I'll be in Pittsburgh, infiltrating a Leftist training school. I probably blew my cover, but oh well. It will be fun to get kicked out!
Posted by Brendan Steinhauser at 2:42 PM 1 comment:

The story is here. Brendan Steinhauser, of FreedomWorks, said Owens asked to participate. Steinhauser quoted an “Armey Axiom” - one that when used by Armey sounds like he’s talking in the third person - that “the idea is bigger than the man.” “It was never personal,” Steinhauser said. “It was a very big disagreement on Referendum C, but I think now if they have something that they agree on, they’ll sit on a panel and talk about it.”
Posted by Brendan Steinhauser at 12:04 AM No comments:

This story appeared in my campus newspaper, The Daily Texan, in March of 2004 when I was a senior at UT-Austin. Here are some excerpts:

Nationwide, conservative students' tactics over the last year have garnered much attention. Two weeks ago, YCT's Austin chapter held a "straight-pride" rally. Last November, the organization's watch list - for professors they deemed biased - landed Kinghorn and UT journalism professor Bob Jensen on "The O'Reilly Factor." Conservative groups across the country have also been criticized and praised for their "affirmative action bake sales," where a cookie costs $1 for a white male, 45 cents for a black male and 35 cents for a Latino. It was his "three-and-a-half years of indoctrination at UT," that pushed Brendan Steinhauser, a government senior, to start a chapter of Students For Academic Freedom on campus over the Christmas break.The nationwide organization argues that campuses are overwhelmingly liberal and demands that administrations seek a more balanced point of view among faculty. Liberal-turned-conservative activist David Horowitz founded the organization last September, and already 123 campuses have started their own chapters.

Posted by Brendan Steinhauser at 11:46 PM No comments: