Assaulted by MoveOn.org on Capitol Hill 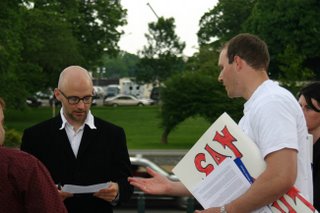 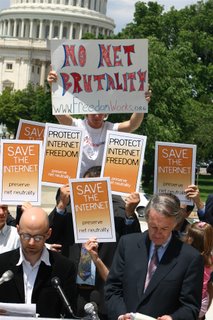 The story from FreedomWorks is here. CNSNews.com has a good write-up on "net neutrality" here. Democratic Congressman Ed Markey joined forces with MoveOn.org and musician Moby to urge the federal government to take control of the internet through net neutrality. FreedomWorks and a fellow Protest Warrior crashed their little party on capitol hill today. The pictures are hillarious, and caused one MoveOn activist to hit me in the face with his sign. This effectively stopped the press conference as the MoveOn people swiftly pulled him away from the press conference. There are lots of pics on our website! And Human Events Online, Free Republic and Protest Warriors are talking about it! One nice gentlemen even suggested I should get a raise for my antics! Internet News reported on our efforts here. Here is CNET's erroneous report, where they said WE were blocking their signs. As you can see, I called them out on their lies. The best account of the incident is here in Beta News.
Posted by Brendan Steinhauser at 6:48 PM

Awesome bro! Wish I was there!

haha... Arpan didn't seem to excited about it... I thought it was a riot!

Brendan, this is awesome. Nice work!